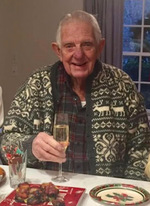 John Robert Elander, Jr. 94 of Waltham, passed away peacefully on Monday, April 11, 2022, at the Meadow Green Nursing and Rehabilitation Center.

At the age of 12, John and his family moved from Newton, MA. to Waltham, MA. where he later graduated from Waltham High’s Class of 1945, shortly after enlisting into the United States Coast Guard with an option of Sea Duty or working in the Accounting Office. Needless to say, he opted for the Accounting Office due to his accounting prerequisites taken in High School. By the end of 1946, John had begun working with his father as an apprentice Carpenter for 4 years. During this time, knowing the value of education he attended Wentworth Institute by night studying Residential Architectural Design and working during the day. In the early 1950’s he took a Correspondence Builder’s Course from The Chicago Technical College while serving with The National Guards in the Combat Engineers for 6 years.

In 1950, while attending an event after church in Dorchester, MA he met the love of his life, the woman he would marry and go on to spend the next 70 years with, and on August 25, 1950, they were married and from this union, they raised 4 children in the home John built in Waltham. In 1960 John decided to stop building homes and instead remodel them. In 1961 this brought about his business of remodeling homes only, where he coined the phrase “Don’t Move, Improve! “Which is a registered trademark in Massachusetts and has proved successful for his own family.

As a longtime volunteer and past President of the Swedish Square, Compass Club of Boston, Past President of The Swedish Home, and the time John dedicated to the Scandinavian Living Center of Greater Boston he had a strong faith in God and played an active role in the lives and love of his family and friends.

Friends and relatives are respectfully invited to gather and remember the love John shared during visiting hours on Tuesday, April 19, 2022, from 10 am – 12 pm in The Mary Catherine Chapel of Brasco and Sons Memorial Chapels Located at 773 Moody Street in WALTHAM, MA. Followed by a Celebration of his life at 12 pm. Interment will be held at Mt. Feake Cemetery Located at 203 Prospect St. Waltham. MA. Parking Attendants on duty.

As an expression of sympathy flowers are welcome.