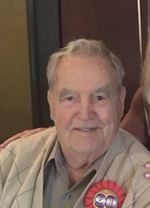 Born in Boston, Massachusetts he has lived in Arlington for more than 35 years having lived in Medford & Somerville for many years.

He was a member of the Association of Notre Dame, the Veterans of Foreign Wars Dilboy Post #529 in Somerville, and the American Legion.

He enjoyed softball, bowling, and playing pinnacle with his friends.

In lieu of flowers, expressions of sympathy may be made in Gordon’s memory the to Tunnel to Towers Foundation, 2361 Hylan Boulevard, Staten Island, NY 10306. Parking Attendants will be on duty.